Why a Perfectly Good God Must* Sometimes Destroy Cultures and Civilizations

Several years ago, I was shocked when a young woman I knew revealed that she had witnessed two human sacrifices when she was a girl. The horror of what she had seen in those rituals left her with severe psychological trauma. Tragically, she ended her life shortly after handing over her testimony to the police.

Thankfully, such horrific practices are probably not the norm in our present society. But what if there were a culture where human sacrifices were “normal” — not limited to the occasional sacrifice at the local temple, but on the commonplace level of parents and children? And what if that same society had abandoned all sexual restraint — practicing sex between parents and children, between siblings, and between people and animals. And what if justice became virtually non-existent, and evil and corruption were the rule?

Question: If it were in your power to stop a gratuitously evil society, would you do it? Or would you decide to let the evil, injustice, and suffering spread like an unleashed disease into the future and to other societies, resulting in a much more evil world?

Is it possible that a perfectly good, all-powerful, and all-knowing God requires the destruction of a society if it becomes sufficiently evil?

where gratuitous evil is an event (or set of events) that neither brings about a greater good nor prevents a greater evil; it is pointless. Another way of describing gratuitous evil is that it has a net negative moral value. The world is the worse for it — suffering, injustice, and evil are unnecessarily increased. When all the good that results from it is compared with all the evil that comes of it, its net moral value turns out to be negative.

The premise proposed by non-theists has implications — if God cannot permit a set of events that qualify as pointless evil, what happens when an entire society or culture becomes a gratuitous evil?

The “non-theist premise” described above is used in arguments for atheism by arguing that if gratuitous evil actually occurs in this world, then God does not exist, since God would never permit pointless evil. Whether such events actually occur is the subject of much discussion between atheist and theist philosophers, but the premise proposed by non-theists has implications — if God cannot permit a set of events that qualify as pointless evil, what happens when an entire society or culture becomes a gratuitous evil?

The implications are as follows:

When does a society become a gratuitous evil?

Simply put, a society results in gratuitous evil at the point in its history where its influence in the future will result in more evil than good, resulting in a net negative moral value from that date on. This can be illustrated in the figure below: 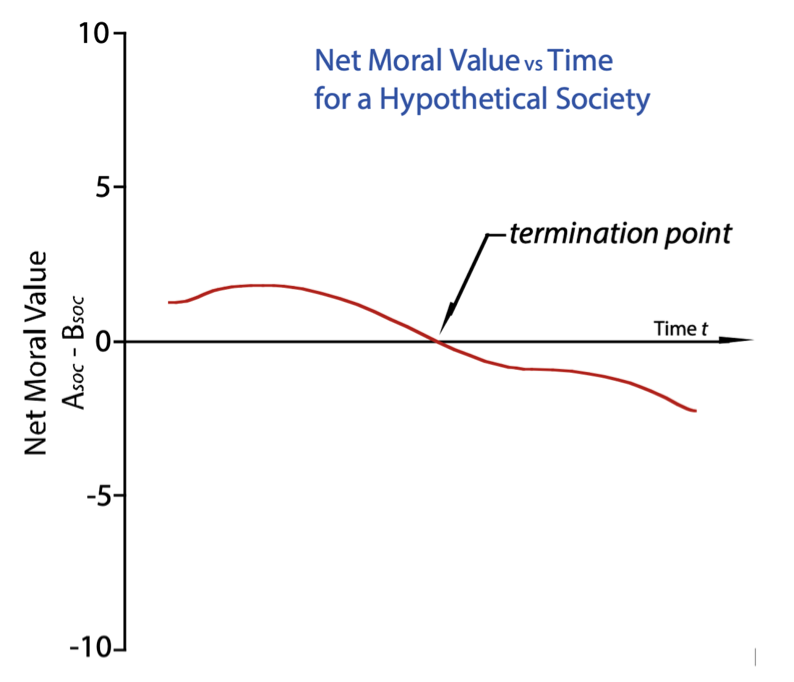 Looking at the figure above, in the early stages of a society, the net moral value might be positive, so it would be wrong to terminate it. As evil increases, it begins to undo the effect of the good in that society until it eventually reaches a point where the evil outweighs the good, becoming the dominant influence. Only when the curve representing net moral value reaches the crossover point must a society be stopped, according to the non-theist premise described above.

An example of this is the ancient Canaanite culture. Four hundred years before the destruction of the Canaanite society, God told Abraham that he could not have that land for another 400 years because the evil of the Canaanites had not yet reached the tipping point.1 It was only 400 years later, when horrific “customs” (including parents offering their children as human sacrifices) and a complete moral breakdown (including sex between parents and children, between siblings, and between humans and animals) were “practiced” by the culture in general, that God ordered the Israelites to destroy the Canaanites.2

Four hundred years before the destruction of the Canaanite society, God told Abraham that he could not have that land for another 400 years because the evil of the Canaanites had not yet reached the tipping point.

This may well appear to be a convenient story to justify their conquest, but God said the same thing would happen to Israel when their society became gratuitously evil — which came to pass with the Babylonian annihilation of Israel some 700 years later. At that point, God said they had become even more morally bankrupt than the original culture had been.3

All this is not merely a philosophical discussion about past history. God has said that humanity will one day reach the crossover point at a time some refer to as Armageddon, requiring human civilization to be brought to a permanent end, except for those who have been spiritually reborn and rescued.4

There are some concerns:

Upon reflection, several objections or worries can be raised:

1. What about good people living in a society that has become a gratuitous evil?

It does not logically follow that because God must destroy a society, culture, or nation that, therefore, he must destroy all the individuals within that society. God can filter out those individuals that do not need to be destroyed. For example, this is what God did for a significant portion of Canaanite individuals5 and, later, when Judah was destroyed6 and, finally, when humanity is annihilated.7

2. Can we know if a culture has become a gratuitous evil?

Human nature is such that we may wish to justify the destruction or conquest of another society on the grounds that they have become a gratuitous evil. Fortunately, we are in no position whatsoever to know such things, as I have explained in another article. We would need to know all the consequences to the end of human history of ending a society versus protecting it, and we simply do not have that knowledge.

3. Can we say that past societies that no longer exist were evil?

So … which way is our civilization headed now, and what should our response be? From my perspective, we are moving in the same direction as the ancient Canaanites, but in a more high-tech manner, and with the legislation and backing of governments behind it. There is an ancient prophecy given by Jesus Christ that states that in the final days of humanity, “wickedness will increase”until Armageddon brings an end to human rule. What should we do about it? Prepare for eternity and help others do the same. To clarify, we can receive forgiveness for our own evil and obtain the gift of eternal life by putting our faith in Christ — growing closer to God each day and helping others prepare for eternity as well. When this is happening, the side effect is that the Christian becomes "salt" and "light" in today's society, with many resulting benefits.

(Note: I have published a much more technical, peer-reviewed paper in a secular philosophy journal dealing with this issue, which you can read here.)

Why a Perfectly Just God Will Seem Unjust

If we disagree with another person’s sense of justice, they will appear to be unjust to us.

Why Evil and Injustice Point to the Existence of God

How can there be both good and evil in this world?